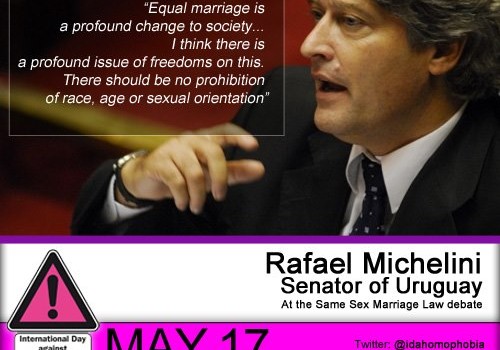 On Tuesday, April 2, 2013, the Uruguayan Senate has voted to approve the country’s Marriage Equality Bill, by a majority of 23 to 8.
This is a landmark move towards full recognition of marriage equality in Uruguay. A country which, just a few months ago, also gained widespread international acclaim for the government’s pioneering decision to decriminalise abortion.
Activists from the Uruguayan LGBT group, Colectivo Ovejas Negras, explained “The bill had been passed by the Chamber of Deputies in December, but the Senate has modified it. According to our Constitution, those modifications will have to be confirmed by the Deputies for the bill to be finally approved. The modifications are minor and do not affect the bill’s essence. In fact, it improves it, bringing the marrying age for women and men to 16 (before, those ages were ridiculously low, at 12 for girls and 14 for boys)… After this Tuesday’s vote by the Senate, the lower chamber will probably vote and pass it in one or two weeks (all in April). Once passed, the government has up to 90 days to regulate it, i.e., to make the necessary changes in red tape to implement it. Hopefully, the first couples will be getting married in July/August.”
LGBT communities and activists throughout Latin America have celebrated the decision, with many taking to social media to show their support.
Uruguay is the latest in a progressive Latin American-wide trend to legalise same sex marriage, following similar laws in Argentina and Mexico City and very favourable judicial decisions in Brazil and other countries.
Activists from the Coletivo added “The Catholic church is making a final attack on the bill, with the usual statements from the bishops. We are not at all worried. These are just angry rantings at the unavoidable. They know they’ve already lost.”