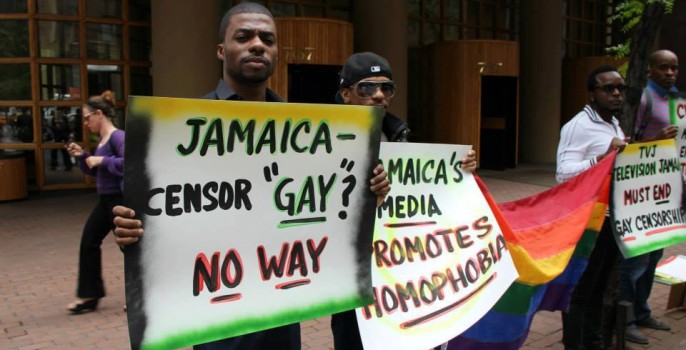 Jamaica is regarded as one of the most hostile places in the world for LGBT people, and was spotlighted as such by Amnesty International as part of their IDAHO actions this year. But over the past month the question of LGBT rights has been very much in the public eye in the Caribbean nation, as local LGBT activists launch legal challenges to contest the situation.

In Jamaican society, not only are same sex relationships criminalised, the notion of extending rights to LGBT communities is often framed as part of a repressive, even authoritarian ‘gay agenda’, which threatens to restrict freedom of expression.
Such attitudes were recently exemplified by the homophobic ad campaign, launched by the Jamaica Coalition of Healthy Society on May 17, to mark this year’s International Day Against Homophobia & Transphobia. Aside from suggesting that Jamaican society is being ‘gagged’ by the alleged advance of LGBT rights, the ad campaign – aired on national television – distorts findings published in The Lancet, to indicate that homosexuals ’cause’ HIV/AIDS.
Yet two high profile cases, seeking to defend and advance LGBT rights, have been forwarded to the Jamaican Supreme Court. Both are attempting to use the country’s 2011 Constitutional Amendment, The Charter of Rights and Fundamental Freedoms, to press forward basic rights for lesbian, gay, bisexual and transgender Jamaicans.

Maurice Tomlinson v TVJ, CVM and PBCJ
The first case, Maurice Tomlinson v TVJ, CVM and PBCJ was brought by Jamaican activist Tomlinson, against three television stations which refused to air a paid-for television advertisement promoting tolerance for LGBT people. In the case heard May 27-31, Tomlinson’s defence argued that the ad was ‘restrained’ and could only have been censored by a ‘very intolerant’ person. As such the decisions not to air the ad limited the claimant’s rights as guaranteed in the Charter, which could not be ‘justifiably denied’ in a democratic society.
See The Video in Dispute: “Love & Respect”