Spain getting ready for nation-wide celebration of IDAHOT 2013

The IDAHOT celebration in Spain will be around a study made by the Spanish Federation of LGBT organizations (FELGTB) and Cogam (a Madrid-based LGBT organization) on the situation of LGBT students in Spanish schools, with results being far from optimistic. For example, 43% of the surveyed youngsters had thoughts on suicide and 40% of them tried it at least once. Due to this, FELGTB have decided to focus our advocacy on LGBT youth issues during 2013.
Following this idea, Arcópoli, a universitary organisation, has decided to record a series of “It gets better” videos. They aim to encourage people out of the associations to join the organization, so that Arcópoli

has a stand in the gay neighborhood of Chueca, in Madrid, on Friday May 17th from 6 p.m. The organizers will try to upload the video clips in real time, so they will immediatly appear online.
The organization will also try to make people aware of the situation of LGBT rights around the world in a funny and educational way to mainstream different issues such as the current state of same sex marriage legislations around the globe or the existence of countries where death penalty is still applied in the basis of homosexuality.
Other organisations around the country will present the aforementioned study on the situation of young LGB people in schools to 20 regional ombudsman in order to lobby for legislation against bullying. They will also organize different local activities and the organizations will read a common manifesto calling to protect young LGTB people.
Finally, FELGTB will present the website www.stopodiolgtb.com aimed at raising knowledge on the situation of LGBT rights in the world, paying special attention to those countries with death penalties to LGTB people.
Below is the link to the study on LGB youth in Spanish.
http://www.felgtb.org/rs/1741/d112d6ad-54ec-438b-9358-4483f9e98868/48e/filename/informe-resultados-riesgosuicidio-lgb.pdf 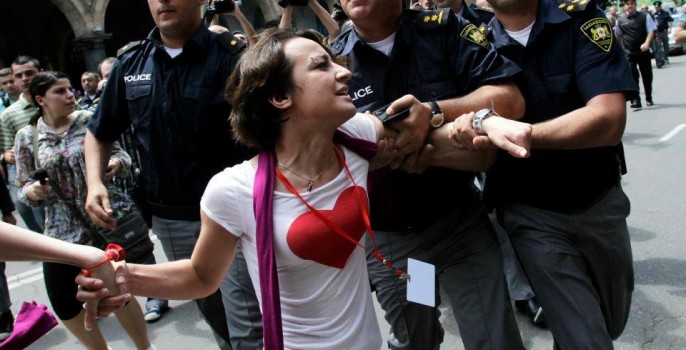 ACTIVISTS IN GEORGIA TO HOLD SILENT MAY 17 PROTEST.