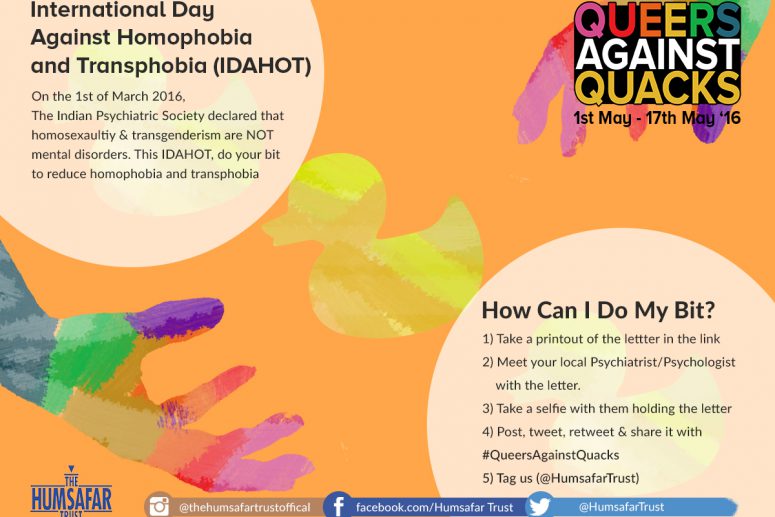 Throughout May LGBT health group the Humsafar Trust are promoting a special project focused on addressing mental health stigma surrounding LGBT people in India. The ‘Queers Against Quacks‘ project will target mental health practitioners promoting pseudoscience and discriminatory practices and also helps to raise public awareness of the ongoing issues surround mental health and wellbeing of LGBT Indians.
In Hyperabad, local LGBT activists will hold an event at the cultural centre Lamakaan. The event will promote diversity and tolerance in local community and also hopes to highlight some of the issues faced by LGBT Indians.
Also to mark IDAHOT 2016, four groups,  Feminism in India, GaysiFamily, Gaylaxy and Orinam, will be co-facilitating a Tweet-chat on May 17, 2016, beginning 12 pm (IST).
The chat will focus on such issues as prevention of and crisis response to violence arising from LGBTIQ*-phobias, tackling intra-community phobias and prejudice, goals of India’s queer movements, allyship, peer education, and solidarity with other social justice movements in the country. Follow the conversation online with the hashtag #IDAHOBIT2016.
The GAURAV (Greater Action for Unity Rights Advocacy and Visibility) is working for health and rights for Male having sex with Male (MSM), Male Sex Worker (MSW) and Transgender (TG) in Maharashtra, India since 2012, has announced few events like online campaign, Local train campaign and street play for celebrating International day against Homophobia, Transphobia and Biphobia (IDAHOT) 2016. Online campaign will include photos from LGBTQ community members and supporters wearing white t-shirt with any message to speak out against homophobia and Transphobia for IDAHOT 2016 on page, uploaded on Facebook and tagging GAURAV organization or can send picture on GAURAV mail ID. Same will be uploaded on social media. And also to address Homophobia and Transphobia to general populations, Street play and campaign in Mumbai local trains are planned.
Facebook https://www.facebook.com/profile.php?id=100008117740825&fref=ts