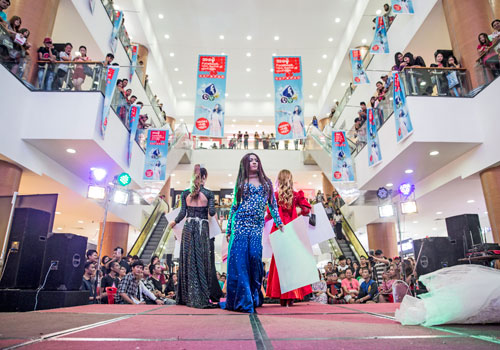 A woman holds a sign advocating for LGBT rights. Zarni Phyo / The Myanmar Times
In Myanmar, where homosexuality is officially criminalised under colonial hangover law, Section 377, and where LGBT persons face discrimination and even violence, this year’s IDAHOT was especially pertinent.
LGBT organisations Colors Rainbow, & Proud and Kings N Queens met in Yangon’s Hledan Centre last week to raise awareness about LGBT human rights.
The event featured panel discussions with author Moe Thet Han and parents of LGBT children as well as a drag talent show.
While this year’s IDAHOT is not a first for Myanmar, it did mark the first time the event was held in a public area, according to Aung Myo Min, the Executive Director of Equality Myanmar and one of the first openly gay leaders during the 1988 revolution.

Transgender models take the stage at the International Day against Homophobia, Biphobia and Transphobia in Yangon’s Hledan Centre on May 17. Zarni Phyo / The Myanmar Times
“Usually we hold IDAHOT in a hotel or elsewhere,” he said. “Many people hate LGBT people without reason and, because of it, LGBT people suffer in their homes and environment.
The silent suffering and discrimination of LGBT people in Myanmar motivated Aung Myo Min to put on an event like this free to the public.
“We need to make the public aware of LGBT people here. While many people accept the notion of human rights, they don’t want to accept LGBT rights,” he said. “They say, ‘it’s too early for Myanmar to accept LGBT rights’. But we are human and we are not different.”
Despite social stigmas, this year’s event saw a huge turnout of LGBT people and allies.

Models catwalk for social change. Zarni Phyo / The Myanmar Times
LGBT organisers held signs reading ‘LGBT is an identity,’ ‘Everyone suffers from homophobia and transphobia’ and ‘We stand proud of our differences’ to greet visitors.
Sexual health pamphlets and books as well as safe sex supplies were on display at the event’s entrance.
In addition to attracting LGBT organisations and advocates, this year’s open event also served as a safe space for Yangon’s LGBT youth.
A 17-year-old gay male who requested to remain anonymous told The Myanmar Times, “I am so happy and proud to be at this event. We can befriend other gays, tomboys, lesbians and trans women despite our every day suffering and discrimination from our family and other people. Today we felt that LGBT are the same as anyone else.”

Crowds of LGBT youth attend the IDAHOT event. Zarni Phyo / The Myanmar Times
The highlight of the IDAHOT event was the talent show which featured dozens of LGBT singers, dancers and catwalk models.
One catwalk model, a 28-year-old transgender woman named Chu said, “I participated in this catwalk because I wanted to raise awareness for LGBT rights. I believe LGBT is a real identity and I don’t want people to feel inconsequential for being LGBT.”
During the panel discussion with author Moe Thet Han and parents of LGBT persons, audience members were able to discuss issues of coming out as LGBT in family life. Many LGBT people expressed problems with family members accepting them and parents on the panel shared their experience and advice on having these challenging conversations.
Though full LGBT equality is still a faraway goal in Myanmar, last week’s event saw an increase in representation, visibility and a public vocalization of LGBT human rights. 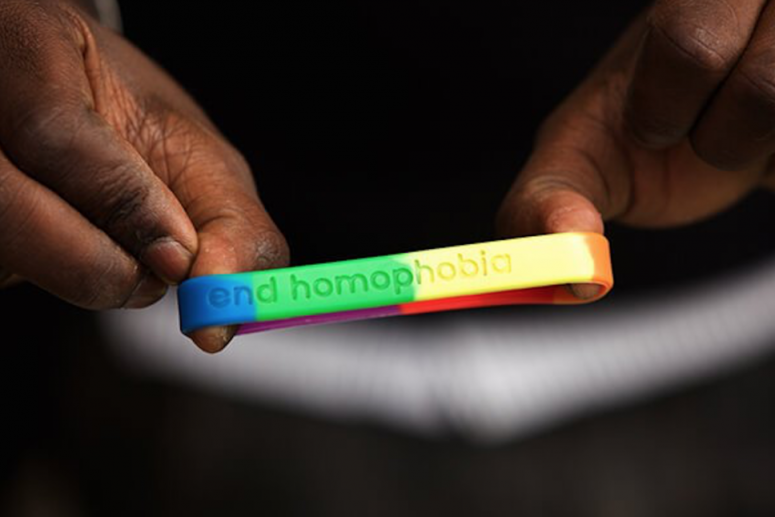 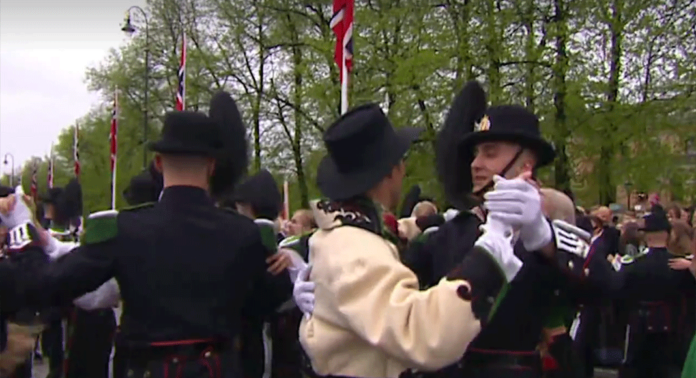