Activities planned on May 17 in El Salvador 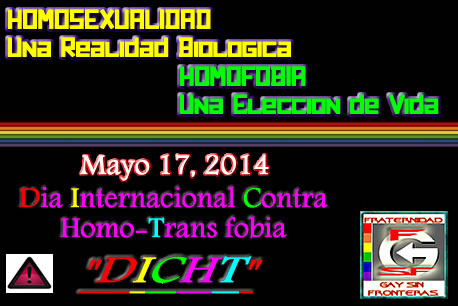 The organisation Fraternidad Gay Sin Fronteras from El Salvador has been organising several activities planned for the week of May 17.

So far, the organisation has been working on the following activities as part of Pride Month:
– National consultation on governmental progress on Hate Crimes against LGBTI
– Invitation by CEPREV , Center for Prevention of Violence against LGBTI of Nicaragua in El Salvador .
– Hearing at World Fund- MCP (Country Coordinating Mechanism) on LGBTI and the use of bank funds.
– Faith Fair, Churches and Hate Crimes in El Salvador, sponsored by USAID – ALDES
The organisers are at the moment in the midst of finalising details for the activities to be performed on 17 May.

Fraternidad Sin Fronteras El Salvador is a non-governmental organisation based in the community that is vulnerable to the risk of HIV/AIDS and STIs in El Salvador.
Fraternidad Sin Fronteras began its efforts to prevent HIV/AIDS in 2000, initially directing at young men, and extending later to young men and women and the general population of those areas of El Salvador who had no coverage by other organisations, developing awareness and education, framed in art and cultural events.
For more information visit their website or their Facebook profile.

Actions for IDAHOT have been announced in Slovakia

Pledge for Full LGBT Equality in the United States is in full swing!