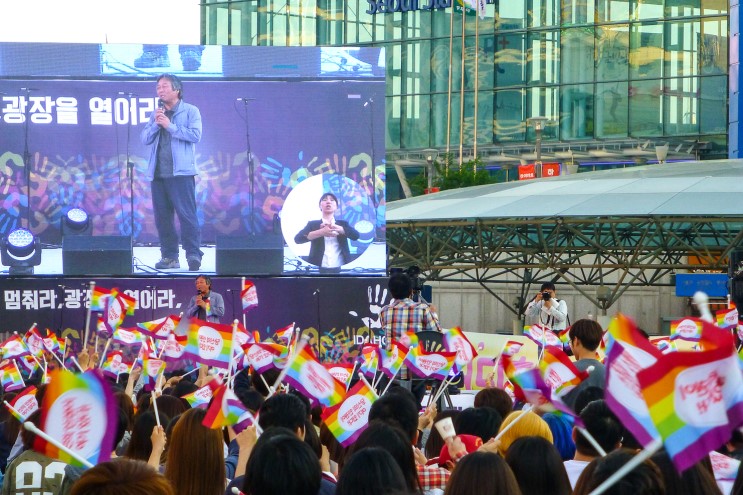 The biggest IDAHOT festivity in South Korean history was held by 103 LGBTI, women’s, people with disabilities’, labor, human rights, and civil society organizations and 159 supporters on May 16th.

[ Demands of the Joint Action for the 2015 International Day against Homophobia, Biphobia, and Transphobia (IDAHOBiT) ]

– Abolishment of Article 92(6) of the Military Criminal Act, which is a de facto homosexuality punishment law

– Abolishment of the Ministry of Education’s Guidelines on School Sex Education Standards, which incite discrimination against LGBTI people

– Establishment of measures to prevent LGBTI-phobic bullying at school

– Guarantee of LGBTI people’s right to and freedom of expression, assembly, and association

– Guarantee of LGBTI people’s rights to work, to access health care, and to form families

[ Resolution of the Joint Action for the 2015 International Day against Homophobia, Biphobia, and Transphobia (IDAHOBiT) ]

Upon the International Day against Homophobia, Biphobia, and Transphobia (IDAHOBiT), which is observed on May 17, we have gathered here from across the nation in response to pleas for resistance against hatred and discrimination. Commemorating the deletion of homosexuality from the International Classification of Diseases (ICD) of the World Health Organization (WHO) in 1990, the IDAHOBiT is a day on which the danger of hatred against gender/sexual minorities is publicized and action is taken for these people’s rights around the globe.

Hatred against LGBTI people damages their dignity and even drives them to death. Like everyone else, gender/sexual minorities are living people with faces and members of this society. The act of dehumanizing LGBTI people and inciting discrimination against them is not the mere presentation of one’s opinions but violence. We must stop the processions of death due to hatred and discrimination.

Going backward, the clock of democracy and human rights in South Korea has instigated hatred against gender/sexual minorities. The Park Geun-hye administration and the ruling party have incited hatred against LGBTI people and local governments, too, have blocked efforts to guarantee gender/sexual minorities’ rights. An LGBTI-phobic figure has been appointed as a commissioner on the NHRCK, the Prime Minister nominee has poured out words of hatred, and the Ministry of Education has issued guidelines on school sex education standards that exclude gender/sexual minorities. The Seoul Metropolitan Government has in effect discarded the Charter of Human Rights for Seoul Citizens, whose creation it delegated to ordinary citizens and human rights experts, due to LGBTI-phobic groups’ relentless opposition to the finally ratified charter’s inclusion of sexual orientation and gender identity as prohibited grounds for discrimination. We denounce the South Korean government for forsaking its responsibility to guarantee and to promote human rights for all citizens.

Furthermore, the monster called hatred has eaten away at not only the lives of LGBTI people but also the entire South Korean society. Community and humanity are being destroyed by raging hatred against marginalized groups including women, migrants, gender/sexual minorities, so-called “pro-North Korean” people, and bereaving families of the victims of the sinking of the MV Sewol, who have only demanded to know the truth behind the tragedy. Urgently needed is change to fight against the monster called hatred, which feeds on inequality, poverty, discrimination, and exclusion.

Those who incite hatred against LGBTI people are not the majority of the public but a very small minority of anti-democratic, anti-human rights, and certain conservative Christian groups. South Korean society must no longer condone their acts of instigating prejudices and ignorance and destroying democracy and human rights, with socially marginalized groups as scapegoats. Gender/sexual minorities, who all too often cannot reveal themselves due to discrimination and hatred, have become these hatemongers’ most convenient preys.

In particular, the queer culture festivals, or LGBTI pride festivals, that are to be held on June 9 and 13 in Seoul and June 27 in Daegu, respectively, have been fiercely attacked. Massive conservative Christian organizations including the Christian Council of Korea (CCK), Communion of Churches in Korea (CCIK), and Council of Presbyterian Churches in Korea (CPCK) have come forward and declared that they will stop these festivals. The human rights violations and violence that obstructed the queer culture festivals last year are likely to be even more vehement this year.

The CCK, CCIK, and CPCK must immediately stop trampling on LGBTI people’s right to assembly and freedom of expression. The police must guarantee gender/sexual minorities’ peaceful assembly and must not condone hatemongers’ interference with such assemblies. Above all, more people must defend and participate in LGBTI people’s festivals and pride parades against hatred.

We want a society in which LGBTI people can live with the rest of the people. The Rainbow Sit-in Protests waged by gender/sexual minorities and their straight allies last winter showed us that resistance and solidarity were the means to fight against hatred. Remembering the Rainbow Sit-in Protests, we once again resolve to engage in social solidarity and praxis against hatred for LGBTI people. When it comes to human rights, there cannot be any exception or delay. We will not remain silent about hatred against gender/sexual minorities in all spheres of society including workplace, school, neighborhood, and home and will fight to create a society where LGBTI people can enjoy dignity and human rights. Let us put a stop to hatred and open up a plaza of diversity and human rights.

Joint Action for the 2015 International Day against Homophobia, Biphobia, and Transphobia (IDAHOBiT) 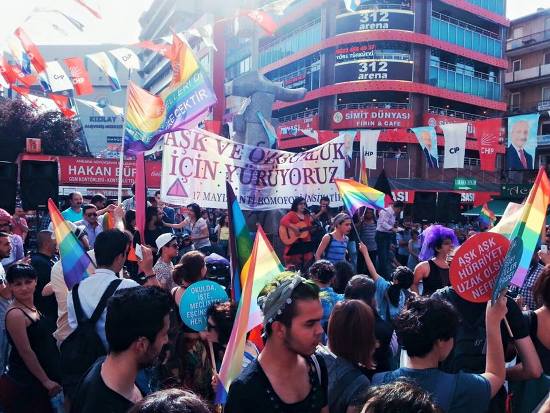 IDAHOT in Turkish capital: For freedom and love! 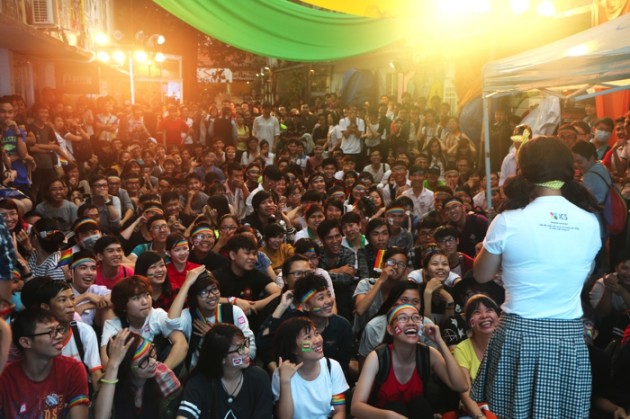 Over 1,000 gathered in Ho Chi Minh City 'Celebrating the Rainbow'