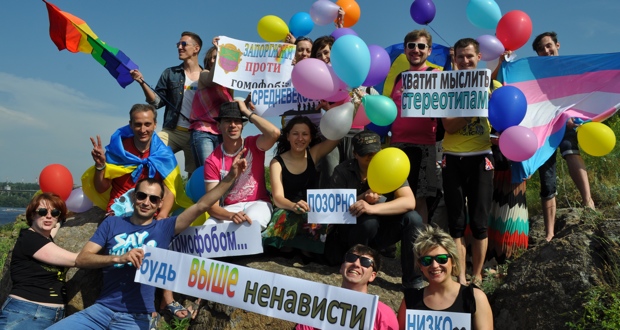 Over the past five years, rainbow flash balloon releases – or simply “rainbow flashmobs” – have become a core tactic for many groups taking action on IDAHOT, particularly in Eastern Europe. In 2009, for example, 35 of these events were organised for May 17 in Russia alone. Still in 2014, despite new legal restrictions on LGBTI community organising (and rising safety concerns), 19 of these actions were held jointly in Russia alone.

The tactic has also been popular in Germany, Ukraine, Armenia and various other countries. And, in 2013, these actions inspired the worldwide focus campaign for IDAHOT – the “Global Rainbow Flashmob” with actions in 40 countries, spanning balloon releases, dance flashmobs, rainbow kiss-ins, chalk-ins and die-ins, and many more kinds of actions in support of LGBTI rights worldwide (You can watch the video compilation of the actions here).

Because rainbow flashmob events are not usually classified by authorities as “protests”, they can provide a way for communities to meet publicly and make a visible impact, without alerting authorities to the existence of the action first. In many cases, activists organise privately and do not release the time and place of the action publicly, until after the event.

We spoke with a group of activists from Ukraine, who have been bravely organising these events since 2011, despite widespread hostility to public actions in support of LGBTI rights in their context. They told us this inspiring story, which will maybe help others thinking about organising this event, or who are also organising in hostile contexts where safety is a key concern.
Where/how did the idea originate? What were the main assumption behind the idea, the main expectations?

Holding flashmobs with the release of rainbow balloons is our tradition since 2011. The format of the event was chosen based on local realities: to conduct any kind of human rights rally or activity the organizer needs to apply to the city municipality, with the exception of flashmobs, because this format is new and yet not established in any Ukrainian official documents. If we decided to apply for the action officially, then, with 100% confidence, they would have banned its conduct under any pretext. In addition, we would have also provoked a surge of homophobic activity which could affect the safety of participants. So only with the flashmob format we have a legal opportunity to join IDAHOT.

The main expectations we had were to speak out for LGBT rights regardless of the political and social situation as well as to have fun. Another expectation was to set up a tradition of celebrating the 17th of May.

What were the risks/threats/obstacles involved and how did you mitigate them?
The anti-gay movement wasn’t so well organized in our city in 2011, because we weren’t visible before. Thus, while organizing our first rainbowflash – our first event aimed at society – we knew that we would face a number of challenges, but till the end we did not know which ones exactly. A few days later after this action, after the first articles about our event were published in the media, we saw growing anti-LGBT activity. The situation worsened in the next years, together with the strengthening of the national LGBT movement, holding Pride weeks, and the increased visibility of our organization, but also with appearance of the first homophobic draft laws in the parliament etc.


The more we were visible, the more homophobic discourse intensified in society – created by religious fanatics and nationalists, and approved by the authorities, thereby provoking hatred, discrimination and violence against gays, lesbians, bisexuals and transgender people. But at the same time we previewed some safety issues. For example, we decided not to spread publicly the place and exact time of the flashmob. Participants and journalists were invited either personally or through our friends/supporters, taking into account all of the same safety concerns. Since 2012 we already had this challenge not to allow violence as we observed, for instance, homophobic groups in social networks which organized a campaign to encourage people who were ready to use violence against the LGBT community, in cases where they detected attempts to carry out human rights meetings. Groups of aggressive hooligans were also created to patrol popular public places in our city, during the whole flashmob day.
How did you get it done? How much time did it take? How much did it cost? How many people did it involve? What were the tactics that you used?
The same idea of every year’s performance was to voice and to discuss the current situation – to write on a piece of paper our dreams and wishes, tie them to the balloons, before we let them color the sky. This part of our flashmob remained unchanged. But every year we tried to add something new.

For example, this year we recorded a video media message. Last year we lined up in a row, composing the media inscriptions “F*ck homophobia” and “Love is stronger than hate”. In 2012 we composed the letter Z with the balloons like in Gender Z (the mark of our city of Zaporizhia). The main event (communication, wishes writing, balloon release) was always about a half an hour of duration. After this part we organized a kind of picnic for the participants. The action didn’t require significant expenses, only costs of balloons, stationery and/or banners’ printing.
This activity gathered about 20 participants every year, those people who decided to be open, visible and brave, despite of the threats.
How do you rate the impact of this action, and how did you see its effects?
Every year the IDAHOT performance raises a huge discussion in society about homosexuality, gender identity, and LGBTQI’s position in Ukrainian society. It’s the most important impact – to increase visibility. We also observe a rise in supporters of our organization, including among journalists – one of the most powerful tools of shaping public opinion.
Watch the video of their IDAHOT 2014 action here: 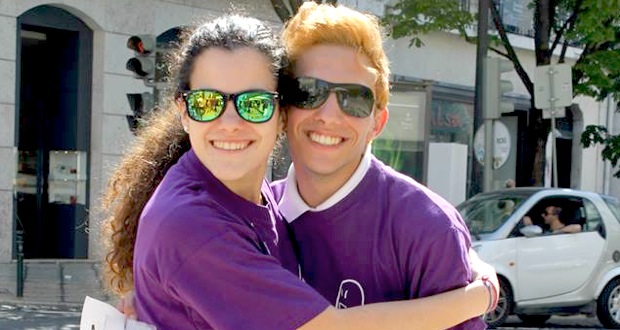 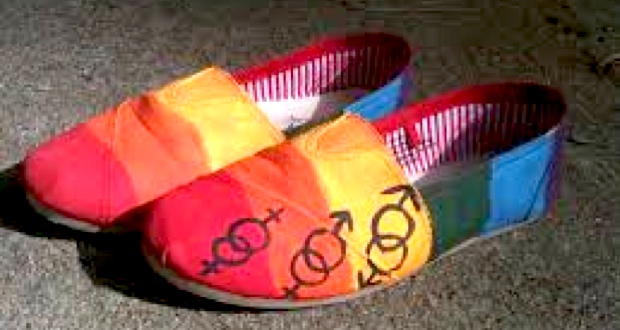