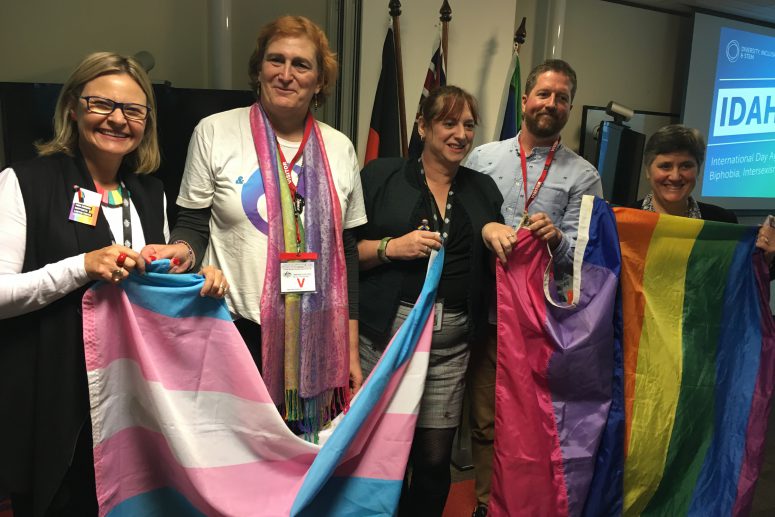 Report From Sally Goldner’s own private (and mostly public!) IDAHOBIT

So May 17th is behind us for another year.
It was, here in the land of Vegemite sandwiches, the first May with marriage equality – this gives some cause for celebration of achievement and some a reminder that there are still many rivers to cross.
Wednesday 16th the mighty Mellem and I tag-teamed out at IPC Health in Hoppers Crossing in Melbourne’s south-western suburbs in a sort of personal story/Q and A (a nice Q and A, not like the one on Monday nights) for 2 sessions with staff. Lots of coverage of diverse stuff and trying to speak for who wasn’t in the room. A great reception. (Lots of other rainbow peeps were at other IPC sites during the week too).
The day itself began with a session at Department of Environment, Water, Land and Planning for the Victorian Public Sector. 3 TGD peeps being yours truly, Jack Metcalfe (VPS) and Rochelle Johnson (corporate) on a panel talking about inclusivity. Good mix – covered needs post-survey, practicalities and experiences in the workplace and areas to tackle e.g. valuing forms of gender expression and unconscious bias e.g. use of language like “soft” skills re skills that might be stereotyped as “female/feminine.” I’ll save the two real winners that happened afterwards (at morning tea) until the end.

Grab the tram and zap across the CBD to Docklands for NAB’s panel with Ruby Susan, Andrea  and moi. A good mix with the focus of each being bi, intersex and trans respectively with considerable intersectionality. I learnt a lot about Kleinfleders from Andrea – awesome. And thank you NAB and Inga Phail for specifically having the panel the way it was and ensuring for once that all the BITs were there. J https://www.linkedin.com/pulse/myth-busting-idahobit-day-kristy-macfarlane/?published=t

Thankfully the final stop was literally up the lane to the Bureau of Meterology’s first ever recognition of IDAHOBIT. My friend and colleague Rebecca Dominguez was a late withdrawal; only a partial change of name tag as Rebecca Corson joined Joel Radcliffe and me. A good range of perspectives and people joining from all around our big broad brown land by livestreaming, Pleasing to see strong recognition of how valuing diversity attracts good talent and awareness of the limitations of gender barriers of all sorts. A case of clear skies ahead for the Bureau re diversity (sorry, that was a bi pun). Given Melbourne’s weather, every iota of talent is needed to increase the accuracy of forecasts. J

A breather before heading to the Clyde Hotel for a much needed refreshment (and chicken burger) for the Union chats launch event. A great panel emphasising the need for intersectional thinking and standing together in solidarity (as one might expect at a union event).

A slight grumpy pan moment in contrast to this when checking emails on arriving home. I might cover this next week.

I think of those countries overseas where events were misrepresented by media, protested or shut down including Lebanon, Uganda, Ukraine, Russia and Liberia (amongst others). I reflect on how visibility and connectedness will still be needed as basics for some time to come. In that light, two highlights sum it up.

After the formal proceedings at DEWLP, two people came up to me. One was a person who heard myself and other bi people speak at a Department of Health and Human Services Victoria IDAHOBIT panel 2 years ago where the focus was bi. I copped flak at the time for stating people come to bi orgs first not so-called LGBTI organisations that may not be close to the grass roots re bi. She told me she went back to her office directly afterwards and heard two colleagues making biphobic remarks. She had the tools to put them in their place. Any pain from flak dissolved. More importantly, shows, sharing info definitely works.

Definitely the biggest moment of the day was the person who I saw out of the corner of my eye was wanting to have a quiet word (tissues/hanky ready here). They (using pronoun in way of gender not known) mentioned how much having trans visibility meant to them. They work in the VPS and are sorta of OK that if transition is needed it will be OK. But being just at the cusp, they are still a little shaky.

Their voice cracked a little, a few quiet tears began.

(I heard from someone at the union event who works for VPS that a summary of the panel was distributed and someone else was similarly boosted. Yes.)