Despite the current situation, many cities in Russia have seen IDAHOT commemorations organized by most regional branches and collective members of the Russian LGBT Network. The biggest celebration yet took place in St. Petersburg with over 350 participants.

The first flashmobs in Russia went in the Far East, in Nakhodka and Khabarovsk. And while in Nakhodka the event passed without any disturbances, the organizer of the Rainbow flashmob in Khabarovsk Alexander Ermoshkin was attacked just before the demonstration. He was seriously injured (unknown person hit him on the head and as a result Ermoshkin lost consciousness), but in spite of that, the balloons were released in 15 parts of Khabarovsk. Later on, Alexander commented on this situation: “They attacked me not because they hate me personally, but because they hate LGBT community”. The activist filed a case with the police and passed forensic investigations. The Russian LGBT Network provides the activist with legal assistance.

“Over 350 people celebrated IDAHO in the center of St. Petersburg on Marsovo Pole, this event becoming the largest LGBT rally as of today in Russia. Representatives of “Coming Out”, the Russian LGBT Network, Side by Side LGBT festival, the Youth Human Rights Group, and the Center for Development of Democracy and Human Rights spoke of the importance of solidarity within civil society, support of vulnerable groups, and the growing strength of the LGBT movement in our common struggle for peace and human rights in Russia”. LGBT initiative group “Coming Out” organized the event. In Moscow, the police detained 17 people. As one of the TV channels commented, activists were detained “because of the colorful balloons in their hands”. Initially, slightly less than 100 people gathered in the Ekaterininsky Park. The police tried to convince activists to leave the park, and then started to detain people. They detained not only 17 activists, but also a courier who delivered the balloons. Those activist, who were not arrested went to another place, bought the balloons and held the rally. Around 40 people took part in the flashmob. All the detained people were released later on. The Moscow LGBT organization “Rainbow association” organized the event.

In Ekaterinburg, the screening of the film “Without men” took place with the support of the International Film Festival Side by Side. Also, the activist joined the international rally and released the colorful balloons.

In Novosibirsk, on May 17, a seminar “Together against xenophobia” and the event called “New generation” took place. The events were organized to attract new people to the movement and to tell them what is done by now and what is to be done. The Novosibirsk regional branch of the Russian LGBT Network and Transgender project «T9 NSK» organized the events.

In Tomsk, the rally was not authorized by the administration; it took place in the local “Hyde Park”.  However, as one of the activists pointed out, the police officers were there to keep the activists safe and everything passed smoothly. 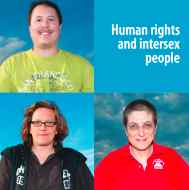 Two milestones for intersex human rights in Europe for IDAHOT