In Hungary, the celebrations of IDAHOT included a focus on Trans issues at a screening as well as online campaign and a flashmob with hundreds of hands reaching out.

The Transgender Association Transvanilla hosted a screening together with with TranszPont (a FB group for trans people and their allies) followed by a discussion on 14 May and organised an online campaign against Transphobia on May 17.

At the first event, the organisers screened the film Transgender Parents, a documentary about love, life and kids after a gender transition. It shares the struggles and strengths of several trans women and trans men navigating different stages of parenting: from pregnancy, through raising infants, toddlers and teenagers. Some, who transitioned prior to founding their families, experience fertility clinics and hospital births; others, who transitioned in the presence of their kids work to renegotiate their identity and relationships within their families. All are openly out in the world as trans and as parents in ways that weren’t possible 20 years ago.
You can find more details about the event on May 14 here.

Transvanilla also organised an online campaign where they asked people to send in a picture of them with their message against Transphobia for IDAHOT. You can have a look at the images here.

Additionally, Amnesty International Hungary involved 10 Embassies in Budapest in a campaign with the slogan: ‘Your gender is your business. I only have to respect it.’ Find out you joint and more details here. The American Ambassador sent her message on Facebook as she was not able to participate in the campaign.

Also in Budapest,  as part of the Face-to-Face campaign, Szemtől szembe and Stereo Akt organised a Flash mob and party on the International Day Against Homophobia.

Seven Minutes Utopia, Live Statue
Two people holding hands are passing you by, just an average couple in the street. Are you surprised? Surely not, you might even smile back to them. And what if this couple is two men or two women, would you smile the same way? We’ll see now.

On 17 May, on the International Day Against Homophobia we organized a flash mob with hundreds of volunteers with the title ‘Hand-in-Hand’. We’ve got an insight into a world in which it’s self-evident and natural that couples of the same sex are free to show their feelings. Although the flash mob was a one-time event, we hope that it made any other day of the LGB community a bit easier – as we all have the right to free love.

You can watch the video on their Facebook page.

Video about the flashmob and the meeting (Hungarian): 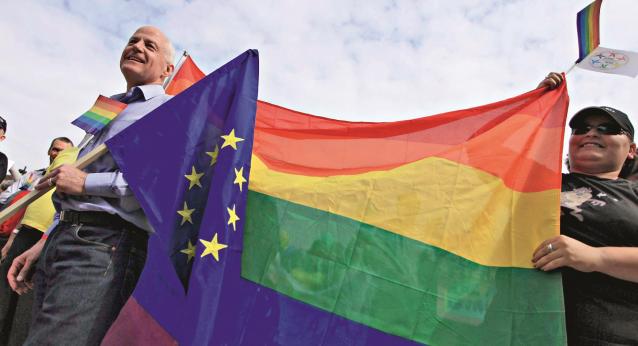 European Institutions mobilised against Homophobia and Transphobia on IDAHOT