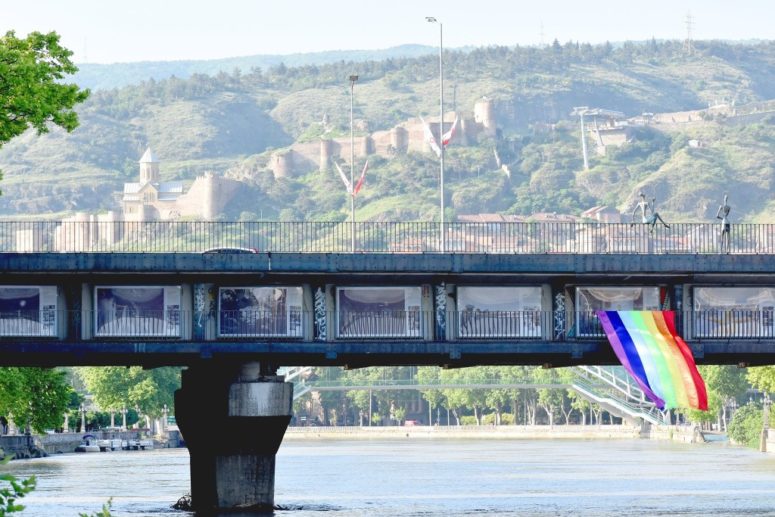 TBILISI (Thomson Reuters Foundation) – A thousand colored stickers with messages against discrimination were posted across the Georgian capital of Tbilisi on Friday to highlight LGBT+ people’s struggle for acceptance in the conservative former Soviet republic.

The initiative coincided with a global day against homophobia that local LGBT+ groups said they could not mark with street rallies because of safety concerns after coming under attack by protesters in the past.

“LGBT+ people in Georgia are seen as some different, exclusive group that might not even exist,” said Eka Tsereteli director of the Women’s Initiatives Supporting Group (WISG), the organization that put up the stickers.

Nestled in the Caucasus, at the crossroads between East and West, Georgia has witnessed a cultural clash between liberal forces and religious conservatives over the past decade, as it embarked on radical reforms and rapid modernization.

Anti-discrimination laws have been passed as part of the country’s efforts to move closer to the European Union, but homophobia remains widespread, rights groups say.

“These guarantees largely remain on paper,” the United Nations resident coordinator said in a joint statement with EU and U.S. diplomats on Friday.

The small labels affixed to posts, walls and bridges across the city, bore the words “I am your child” or “I am your friend” and a QR code that, when scanned with a mobile phone, led to a website named Meaqvar – Georgian for “I am here”.

The page listed data about the challenges faced by the LGBT+ community. More than 95% of gay, lesbian and transgender people report having suffered physical or verbal violence at least once in their lives, according to WISG.

Equality Movement had planned to put up 11 billboards with anti-homophobia messages across Tbilisi but the advertising company refused to run them citing a high risk of vandalism.

The company, Alma, did not immediately reply to a request for comment.

“(We are) very frustrated,” said Berianidze. “That was basically the only way we came up with to deliver our message to society because we are muted and silenced in every other aspect and way and even this was unsuccessful.”

In 2013, a LGBT+ rally was broken up by a crowd of priests and thousands of protesters, forcing participants to flee.

The day has since been marked by large so-called Family Day demonstrations, backed by the influential Orthodox Church in support of “traditional family values”.

Georgia’s interior ministry said in a statement that the protection of human rights was one of its key priorities.

LGBT+ activists are planning to hold Georgia’s first-ever “pride” event, including a conference and a street march over six days in June.

But organizers face similar challenges, with far-right groups that have already threatened to disrupt the event.

Queer rights activists abstained from holding a demonstration in Tbilisi for this year’s International Day Against Homophobia, Transphobia, and Biphobia over safety concerns. Next month, Tbilisi is expected to host its first ever queer pride event.

After warnings from far-right groups that anti-homophobic demonstrations would be met with violence, the Equality Movement, Women’s Initiatives Supporting Group, and other queer rights groups decided to limit themselves to online campaigns only on Friday.

On 17 May hundreds of people, including priests, churchgoers and far-right groups took to the streets to protest ‘sodomy’.

Some of them came out to celebrate Family Purity Day, a holiday created by the Georgian Orthodox Church in 2014, a year after thousands of people led by priests attacked several dozen queer rights demonstrators in the city.

One poster held by a child at the rally read ‘May God not burn Tbilisi like Sodom and Gomorrah’, while other posters called for the protection of ‘family purity and morality’.

In a sermon at the Cathedral, the head of the Church, Ilia II, told those gathered to ‘remember that a family is happy only if it’s a lawful family. And a lawful family consists of a man and a woman’.

The rally was organised by the Georgian Orthodox Church, however, several days earlier, the Church issued a statement denouncing violence.

‘We’d like to remark that this is a peaceful event and has nothing to do with aggression. It is a reflection of our society’s support for traditional values. We will reiterate that the Church opposes all kinds of violence, whomever it comes from’, said a statement issued by the Church on 15 May.

LGBT flag on a bridge

Despite the decision by activists to abstain from a public demonstration, queer rights activist Nino Bolkvadze hung a rainbow flag over the central Baratashvili Bridge.

The day before, the Women’s Initiatives Support Group (WISG) posted stickers throughout the city with QR codes that directed visitors to a website called ‘I am here’.

‘I am your son. And you don’t want to believe this. 60% of us lives with our families and at least 84.4% have experienced domestic violence at least once. We are under permanent psychological pressure’, says one of the many messages published on the website.

Several days earlier, WISG reported that their Facebook page had been blocked as well as links to their website posted on Facebook, allegedly after an organised campaign by anti-queer groups to report the page as abusive.

The Equality Movement had made plans to mark the day before eventually deciding not to campaign publicly.

The group had planned to put up pro-equality advertisements on the billboards, however, the advertising company they had a contract with pulled out at the last moment.

‘Our lives are in danger. Because the government won’t ensure our safety, we are forced to refuse our constitutional rights to gather. With this poster, we are trying to make our voices heard: 17 May is the International Day Against Homophobia and Transphobia. Rethink what happened on 17 May’, one of the posters the Equality Movement wanted to display read.

[Read more about the ad company on OC Media: Ad company pulls out of deal to display anti-homophobia posters in Tbilisi]

The US embassy to Georgia issued a statement noting that while some progress had been made, the ‘everyday reality for the LGBTQI+ community in Georgia is that these guarantees largely remain on paper’.

‘We thus urge Georgian leaders to take resolute action to ensure that the equality guaranteed in law is realised in practice, so that every person in the country, including LGBTQI+ persons, can exercise their rights. In this context, we note that cultural, religious and moral beliefs — even if held by a majority — can never be an excuse for tolerating human rights violations’, the joint statement said, written on behalf of the United Nations Resident Coordinator; the Ambassadors of the European Union (EU), Austria, France, Germany, Italy, the Netherlands, Slovenia, Sweden, and the United Kingdom; the Head of Mission of the United States; and the Head of the Council of Europe Office in Georgia.

The Public Defender of Georgia noted that it was unfortunate that ‘the rights situation of LGBT people has not changed substantially in the country’.

‘The influence of anti-gender groups and homophobia are still strong in society, which is why LGBT people suffer from oppression, discrimination, and often become victims of violence. In addition, due to the homophobic and transphobic sentiments of a significant part of society, enjoyment of the right to education, work, healthcare, and social protection remains a problem for LGBT+ persons’, said the statement.

It elaborated that measures taken by the state for the protection of LGBT+ people are inadequate and cannot respond to real challenges. It criticised the government for not having a systemic vision about how to improve the rights situation of LGBT people.

Prominent human rights groups united in the Coalition for Equality also criticised the government for not recognising violence against queer people, which they said, ‘hinders the transformation of the homophobic political and social environment’.

Moreover, they said, ‘by inefficient policies, the state indirectly supports violence and discrimination’.

How officials react on homophobia

In 2017, the Human Rights and Civil Integration Committee of Georgia’s Parliament pledged to mark International Day Against Homophobia and Transphobia on every 17 May. The pledge was contained in the committee’s 2017–2018 Action Plan, which was unveiled on 1 September by the head of the committee, Sopo Kiladze, alongside representatives from the EU delegation to Georgia and the United Nations Development Programme (UNDP).

However, in 2018, Liberali asked Kiladze several days prior to the date whether the committee intended to mark the day as they pledged, to which she said they would not because they did not want to. Since then, several demonstrations were held in which queer activists and human rights organisations demanded her resignation.

The police regularly issues statements prior to 17 May pledging safety guarantees for protesters, and 2019 was no different.

On 16 May, the Interior Ministry said in a statement that ‘the ministry protects the freedom of expression of people regardless of their political and other views, gender, religious belonging, sexual orientation, gender identity and other characteristics’.

However, the ministry failed to protect freedom of gathering and expression of several dozen queer activists in 2013, when a homophobic mob led by priests attacked demonstrators on 17 May. Despite numerous videos depicting the acts of violence, none of the attackers were held responsible.

The creation of a human rights department in the Interior Ministry in 2018 has been praised by several rights groups. According to the statement published on 17 May, in 2018, the number of people charged for the crimes committed based on discrimination tripled compared to the previous year.

‘In order to protect the interests of victims and witnesses, also to avoid re-victimisation, the Victim/Witness Coordination Service was established. The coordinator prioritises communication with victims of crimes committed based on discrimination’, said a statement by the ministry.

However, the Public Defender’s 2018 report said they had received numerous complaints regarding homophobic attitudes from law enforcement officials.

The report said that violence against queer people, whether in the family or in public spaces, was a serious problem, and that the government had been unable to respond to this challenge.

‘In some cases, complainants withdrew cases and refused to cooperate with the general inspection or the Prosecutor’s Office because they didn’t believe an investigation into their cases would be timely’, the report read.

A National Democratic Institute poll from June 2018 suggested that only 23% of Georgia’s population think that protecting the rights of queer people is important.

This was a 2% gain in support compared to 2015, when 21% said the protection of their rights was important.

The results suggested that 44% think the protection of queer rights was not important, while 26% have a neutral attitude.

Queer people in Georgia are ‘completely defenceless’ against domestic violence, a recent study conducted by the Georgian rights group Human Rights Education and Monitoring Centre (EMC) found. The study said this frequently resulted in victims being forced to leave their homes and which impacted their education and careers, contributing to homelessness.

Rights activists in Tbilisi decided to skip demonstrations held on the International Day Against Homophobia and Transphobia (IDAHOT) over safety concerns. After having received warnings from far-right groups that anti-homophobic demonstrations would be met with violence, the Women’s Initiatives Supporting Group (WISG) decided to limit itself to online campaigns, posting thousands of coloured stickers with messages against discrimination. Read full article 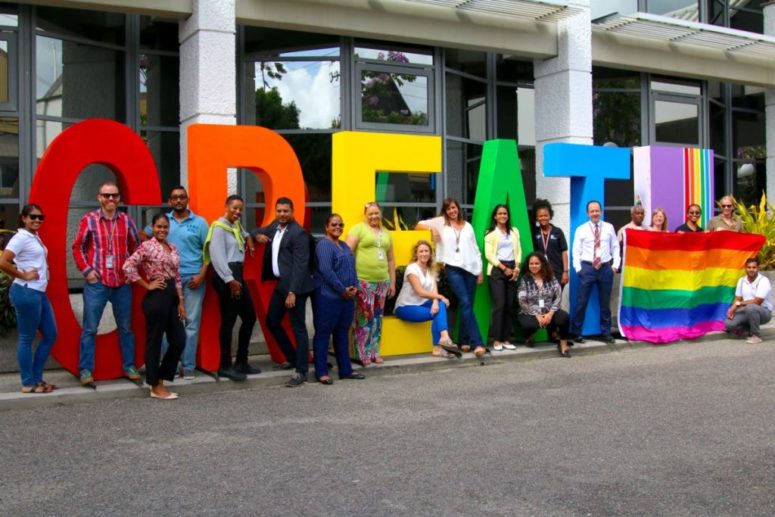 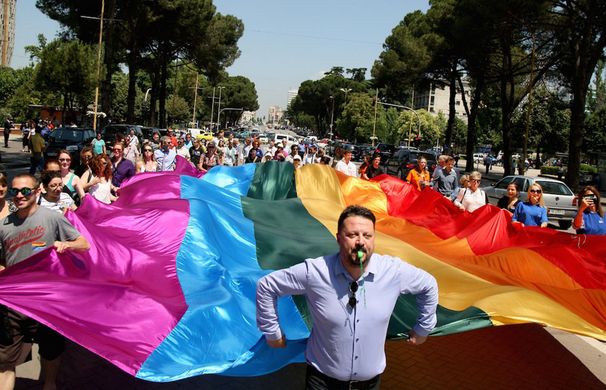