In Spain, a huge wave of mobilisation was registered for IDAHOT 2014, with numerous groups and organisations taking action in at least 10 cities and provinces, including Madrid, Barcelona, Valladolid, Valencia, Alicante, Melilla, Oviedo, Ávila, Sitges and Seville.

Just some of the actions reported around the IDAHOT 2014 in Spain were:
Valladolid: The Organisation PAC LGTB+ Valladolid held two events to commemorate the IDAHOT 2014
Activities held were (on Thursday, May 15), a presentation of the video “LGBT-Phobia in our streets” and (on Saturday, May 17) a Kiss-In against LGBT-Phobia

The platform Apoyo al Colectivo LGBT+ (Support of LGBT+ people) from Valladolid is formed by activists, joined to fight discrimination. Its main objective is to combat LGBT-Phobia in Valladolid and the wider province.

On Saturday, May 17 at 7pm, they invited everyone to join on the Plaza de los Pinazo de Valencia (at the exit of the metro station Colón) for the manifestation of the International Day against Lesbophobia, Homophobia, Biphobia and Transphobia (LGTB-Phobia).

For 2014, in the International Year for LGBT Human Rights, they prepared ‘a surprise to claim an end to the violence worldwide and the escalating LGTB-Phobia that we are suffering from, especially in certain parts of the planet, but with the awareness that no country is free from discrimination and violence against lesbian, gay, bisexual and transgender people.’
LAMBDA, is a non-profit organisation that was founded in September 25, 1986 prompted by the situation of legal discrimination and social marginalisation homosexuals, bisexuals and transsexuals were suffering under.
For more information visit their website, follow them on Twitter and visit their Facebook page.

Arcópoli organized a street event on Saturday, May 17 at 6pm, where they created a giant mural about LGBT rights in the world, and held various other activities to raise awareness about the situation of LGBT people in the world. For the finale, they displayed a giant rainbow flag, and performed a theatre act to demand equality commitments from the government of Spain. They also organised a talk with Amnesty International on Monday, May 12, in which they discussed AI’s work done in the field of LGBT rights.
At the same time, the organisation COGAM also held a discussion event and a a rally. COGAM is the LGBT collective of Madrid that has worked for more than 25 years towards equality for LGBT people. It is one of the founding institutions of the FELGTB and one of the driving forces since the beginning for gay marriage in Spain.

Alicante: The organisation Diversitat Alicante also hosted a series of events around May 17

As part of the activities of May 17 they organised the following events:
May 10: The first edition of the “Angie Simonis” awards. This award is named after the activist Angie Simonis, who was president of the Collective from 2005 till 2007 and recently passed away. It is their unique tribute to this fighter for the Human Rights of the LGBTI Collective, especially for the visibility of lesbians.
Diversitat’s directive together with its members and partners voted 3 winners of this First Edition: Individual, Collective and Institution/Association. The winners of the Angie Simonis 2014 awards were: Diversitat is a non-profit association comprised of women and men located in the Counties of Alicante, who- among other things- are united as Lesbian, Gay, Transgender, Bisexual and Intersex (LGBTI) but also in the defence of Human, Civil, Cultural, Political and Economical Rights which everyone is entitled to.
For more information visit their website, follow them on Twitter or visit their Facebook page.
Other actions
The Spanish Scout Association released a statement of support for the IDAHOT 2014. Spanish National newpaper El Diario published a positive round-up of events around the world which was shared over 4,000 times. They link to actions taken in Melilla, Oviedo, Ávila, Sitges, Valencia, Valladolid and Alicante. 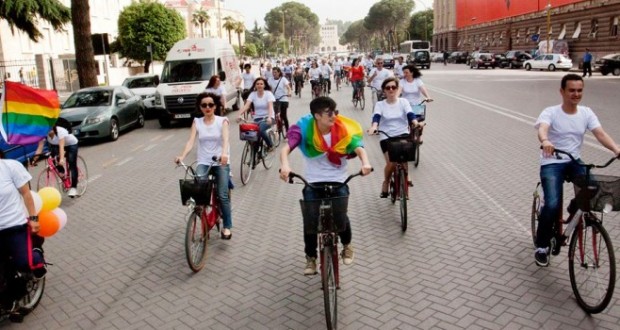